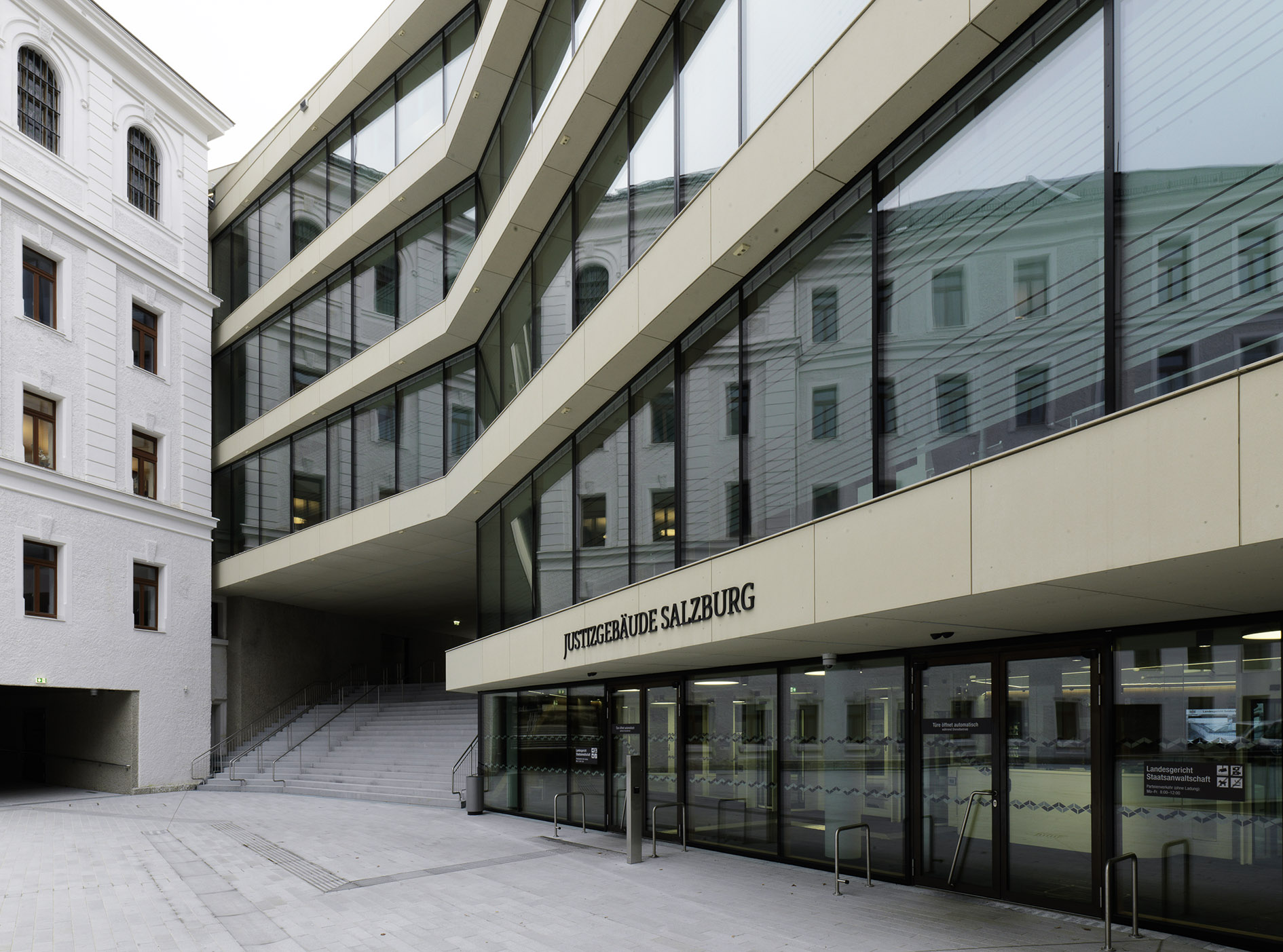 The "klimaaktiv Silver" project in Salzburg was impressed with the ecological and visual features of the concrete skin facade panels by Rieder.

As a part of a comprehensive refurbishment project, the courthouse in Salzburg – executed by “Bundesimmobiliengesellschaft (BIG)” as building-owner – not only parted with its old walls, but also with its time-honored architecture. The architecture firm Franz&Sue came up with a well thought-out new and radically different concept that did away with the regional court’s authoritarian character and transformed it into an open space of encounter. Sustainability and a sensitivity to the needs of the many target groups associated with the courthouse were the overriding themes. The facade panels of the concrete specialist Rieder from Salzburg are not only in keeping with monument conservation standards, they also impress with their ecological footprint. The light concrete skin facade was used on the envelope of the new building. The durable concrete slabs complement the large glass surfaces and aesthetically tie in with the historic old building.

The building type of the law courts dates from the second half of the 19th century. At the time, such buildings were supposed to reflect the state’s power. Today, our values have changed fundamentally – a court should now stand for continuity and accountability. “From an architectural point of view, we broke with the traditional understanding of justice and carefully but significantly modified the Salzburg courthouse with monument conservation in mind. Now this eye-catching courthouse opens up to the city on all sides. Its inner courtyards, which can be accessed and marvelled at by passers-by, showcase a new side of the court building. It is transparent and open, just the way we imagine the jurisdiction in a democracy to be”, explains Christian Ambos, Franz&Sue Partner. The new building constitutes a balancing act between modernisation, monument preservation and climate protection. Salzburg’s courthouse was transformed into a new public space for the city.

The central aspect in the planning and execution of the building was to use only high-quality and ecologically sound products. The existing building was awarded the “klimaaktiv Gold” standard, the new building “klimaaktiv Silber”. The courthouse also internationally meets the highest energy efficiency requirements and exacting ecological criteria. In addition, the project was awarded the Austrian national award for Architecture and Sustainability for its outstanding achievements in the area of sustainable construction and renovation.

When it came to choosing the facade material, the architects focused on lightness and sustainability. Rieder’s concrete skin facade panels in the color sahara are used in the building core – the Y-shaped new part with its magnificent entrance hall. They cover the entire fully glazed complex. Natural raw materials are used for Rieder’s glassfibre reinforced concrete products. This gives the material a sense of familiarity, liveliness and an unmistakable honesty. The panels tie in perfectly as a modern addition between the new and old buildings.

“We chose Rieder’s concrete skin product because we have already had positive experiences with it and it was important for us that the facade ages well”, says Christian Ambos, Franz&Sue Partner, about the decision to use Rieder’s facade panels. In addition to durability, low maintenance and total fire resistance, Rieder has many other arguments up its sleeve when it comes to ecology. It goes without saying that Rieder uses non-toxic products (free of crystalline silica) and reduces its use of primary energy in production to a minimum. In an effort to reduce environmental pollution, Rieder is constantly developing new strategies: In line with our zero-waste policy, for example, all waste materials from production are reused in other areas; innovative technologies help us reduce offcuts; when we do produce waste, it is utilised in product innovations made of waste cuttings which we developed ourselves. The greatest driving force behind our continuous development efforts is the striving to create more than just sustainable concrete products in order to allow us to make an active contribution to the energy revolution ourselves.