Innovation formparts.fab by Rieder causes a stir in Berlin 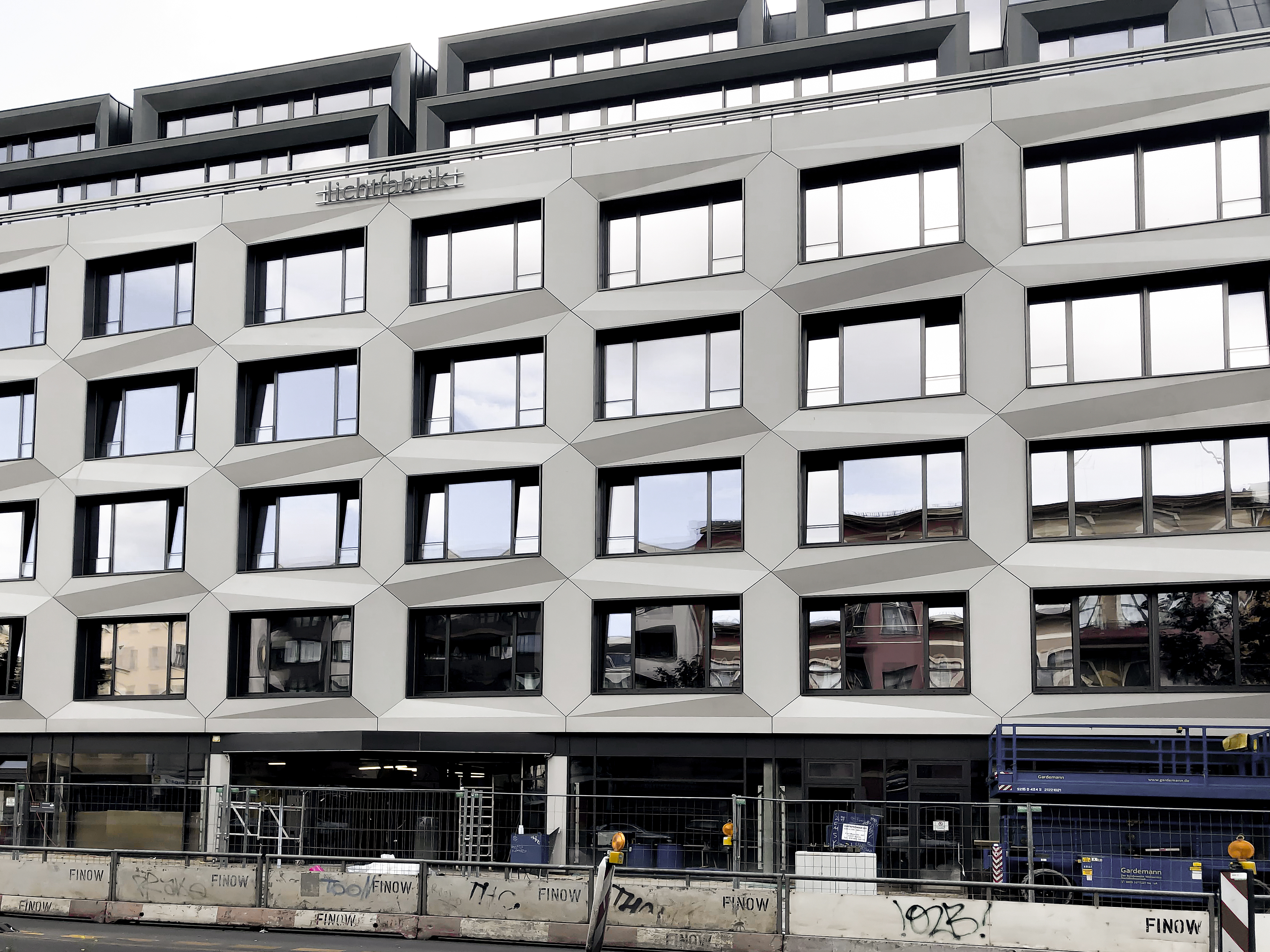 Bollinger+Fehlig Architekten, BDA and Stoeckert Architekten sent an important signal with the three-dimensional concrete facade by Rieder in Berlin's Luisenstadt district. The formparts.fab product innovation plays a major part in creating a synthesis between monument protection and contemporary architecture.

The newly developed formed parts made of glassfibre reinforced concrete used in the extension of the well-known “Lichtfabrik” industrial yard impress with their authentic material properties, flexible design options, easy translatability of the architectural ideas and the straightforward supporting structure and the associated economic benefits.

Luisenstadt is a historic district in the centre of Berlin. The district features residential and commercial buildings from many different eras as well as factory buildings from the beginning of the 20th century. The extended Lichtfabrik industrial yard is a typical example. The area, which was extensively renovated in 2008, offers space for various institutions and companies from the cultural and creative sphere. The industrial yard is located in the Luisenstadt conservation area, which is subject to specific requirements for the preservation of its urban character. The new loft-like office building therefore has to meet a variety of monument preservation specifications.

Rebellion against a faceless Berlin

The architects have succeeded in finding a confident solution that combines monument protection requirements and the integration of the new building into the existing structure. This resulted in a unique facade which at first glance appears subordinate to the existing structures. At second glance, however, you can see how intelligently and sensitively the facade of the new “Lichtfabrik” forges its own path. With the formparts.fab made of glassfibre reinforced concrete, the architects succeeded in setting the tone for the building cubature. The elements, which are relatively light for concrete, can be processed flexibly and thus played a major role in putting the unique concept into practice.  “The material chosen for this building is the textile turned stone that serves as a covering for the building shell. In contrast to solid curtain elements or half shells, our aim was to save on materials. This curtain wall with elements from Rieder uses authentic materials and conveys a solid appearance that is in keeping with the monument. The construction principles of the building are made visible and are showcased in their interaction”, explains architect Michael Pape (Stoeckert Architekten).

Most of the facade structure was realised in polygonally tilted and tinted curtain-type concrete elements. “If the virtually animated flowing dress stands for a maximum of formal freedom and the faithful replica of a Berlin made of stone for maximum restriction, then this curtain wall is our synthesis, our way of echoing this discourse through the medium of construction. By twisting the large pairs of windows by a few degrees, the flat surface of the curtain wall is translated into a polygonally modulated garment. This means the facade is not pure decoration, rather it follows the formal effect of the intervention initiated by the design,” says architect Michael Pape (Stoeckert Architekten) about the concept of the street-facing facade.

Much more than just decoration: the new formparts.fab

Due to their low weight and large span widths, Rieder formed parts are perfect for facades with challenging geometries. The new sharp-edged formparts.fab are not formed from one slat like the conventional formparts.mono, they are assembled from several parts. With this method, the edges can be formed with a chamfer of 3 mm (+/- 1.5). This makes the elements even more flexible; up to seven metres long, the wide range of surfaces, textures and colours of the flat concrete skin panels and another important factor: the substructure is just as straightforward and economical as a facade with straight panels.

The new shaped elements by Rieder thus meet even more architects’ wishes and are at the same time easy and straightforward to install. This makes formparts.fab an extremely economical solution for challenging building envelopes. Pre-assembly in the factory, independent of weather conditions, guarantees a high quality standard and rapid assembly on site. With the introduction of this product innovation, Rieder remains true to its goal of providing architects with the right tools and products that allow them to implement their ideas using concrete at the highest level. Furthermore, formparts.fab of course meet the same high standards of sustainability as all other Rieder products.