Element construction
Bochum, Germany
Back to Overview Next Project 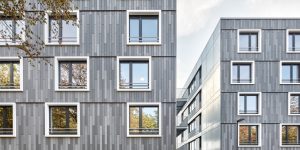 ACMS Architects designed a new building in a modular hybrid construction with 258 living spaces for students in passive house standard. The focus was on reducing construction costs and time, provide affordable housing as well as variable subsequent utilisation. It was possible to reduce construction time by 10 months with a prefabricated shell, a prefabricated facade and prefabricated bathrooms.

The architects designed three L-shaped buildings, thus creating quiet and sunny courtyards facing away from the street. The complex was developed as a modular system consisting of prefabricated elements. Highly insulated wooden panel elements were used for the building envelope. The factory assembly of windows, building services and the facade resulted in ecologically optimised components with a wide range of design options. The architects opted for Rieder’s sustainable öko skin facade slats.

The project was certified according to the system of the German Sustainable Building Council (DGNB) and was awarded the Gold Standard. 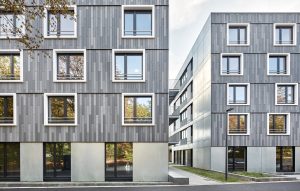